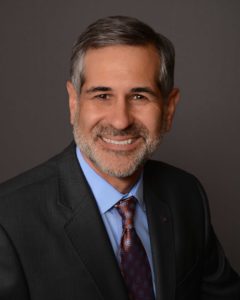 Louis J. DeVoto is a shareholder at the firm and experienced personal injury attorney who represents clients in all types of serious injury and wrongful death cases caused by the negligent and reckless conduct of others.  Mr. DeVoto is Certified as a Civil Trial Attorney by the Supreme Court of New Jersey and the National Board of Trial Advocacy.  He has served as President of The Trial Attorneys of New Jersey and is a past Chair of the NJ State Bar Association’s Medical Malpractice Committee.

Lou’s extensive jury trial and appellate experience has resulted in him achieving many verdicts and settlements in excess of one million dollars, including recent settlements for $9.5 million in a medical malpractice case involving birth injuries, a $4.8 million wrongful death settlement, a $2.7 million settlement in an industrial explosion and a $2.6 million settlement in a bike accident involving a garbage truck.  His case results are consistently reported in the New Jersey Law Journal’s featured verdicts and settlements with multiple appearances in the yearly Top 20.  Lou has appeared many times in the appellate division arguing to uphold verdicts that he achieved at trial including several appearances before the Supreme Court of New Jersey. (The law firm is ethically required to inform you that results may vary depending on your particular facts and legal circumstances).

Mr. DeVoto is one of only a few lawyers in New Jersey invited to speak at the “Year in Review” seminar given by the New Jersey Institute for Continuing Legal Education where he provides practical commentary for lawyers on the most important legal decisions of the year.  He is a past recipient of the “Professional Lawyer of the Year Award” by the New Jersey Commission on Professionalism in the Law and is a member of the American Board of Trial Advocates (ABOTA-NJ) and the Burlington and Camden County Bar Associations and the American Association of Justice-NJ.  He is licensed to practice in the U.S. Supreme Court and all Federal and State Courts in New Jersey and Pennsylvania.

Martindale Hubbell has awarded Mr. DeVoto with its AV rating, the highest achievable for legal skill and ethics for many consecutive years.  Lou is consistently listed in Best Lawyers in America, including being listed as one of the Lawyers of the Year in the State of New Jersey for 2017 and 2022.  He has also been included in the New Jersey Super Lawyer listing for 16 consecutive years, including the Top 100 Super Lawyers list in 2020.

Lou resides with his wife and has three children.

No aspect of this advertisement has been approved by the Supreme Court of New Jersey.